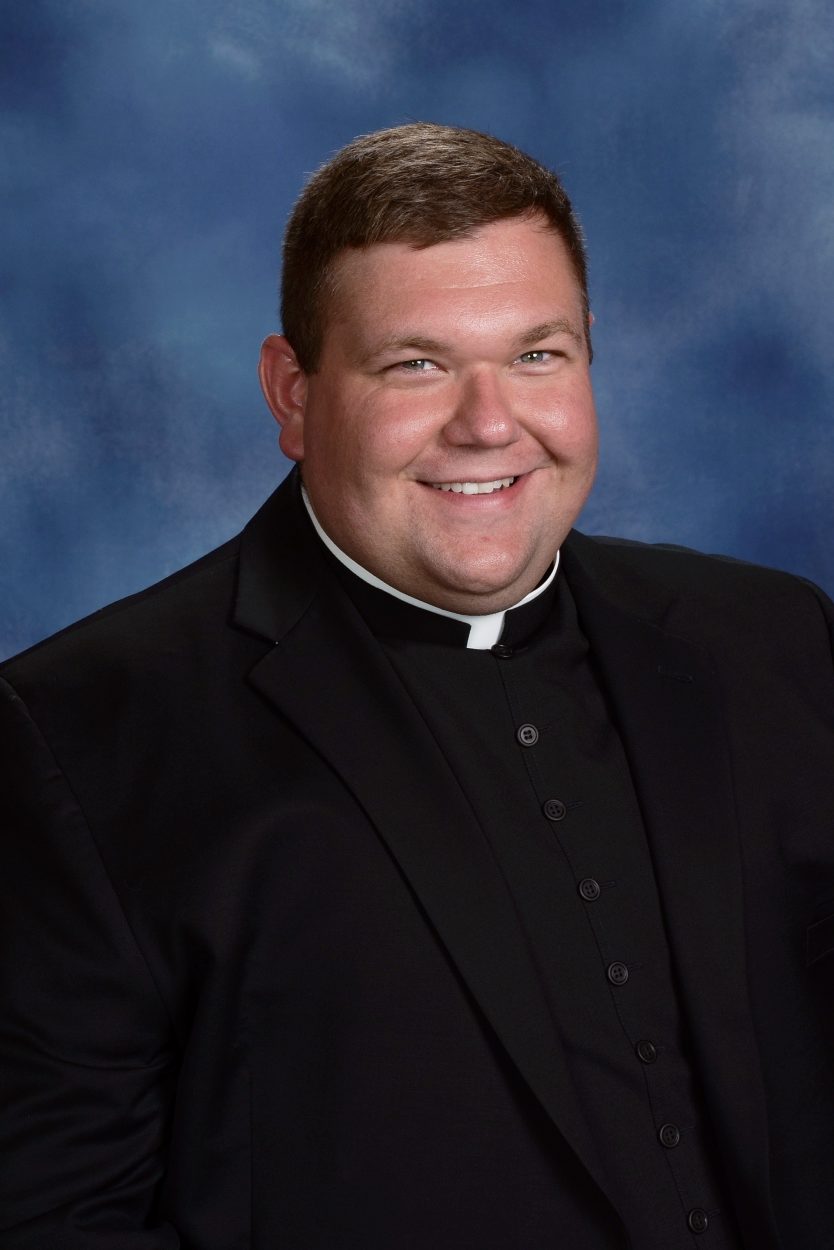 Email: rpruess@hffdl.org
Father Ryan Pruess was raised in Slinger, Wisconsin which is a small Village nestled within the the beautiful rolling hills of the Kettle Moraine. It was there where Fr. Ryan attended St. Peter Catholic grade school and also attended Slinger High School. After graduating from high school in 2001, Fr. Ryan began his post-secondary education at Waukesha County Technical College where he earned his Associates of Arts degree in Criminal Justice. Following the completion of the degree program at Waukesha County Technical College, Fr. Ryan entered the 13 week police recruit academy and completed the necessary training to begin a career in law enforcement.

After discerning a calling from God to enter the priesthood, Fr. Ryan placed a career in law enforcement on hold and met with the vocations director for the Archdiocese of Milwaukee. It wasn’t long after that meeting that Fr. Ryan returned to school to begin studies for the priesthood.   Fr. Ryan began studies at Cardinal Stritch University where he earned a Bachelor of Arts degree in Religious Studies. He was accepted to St. Francis de Sales Major Seminary in 2008 and completed his priestly formation program in 2012. The academic portion of his priestly formation program was conducted at Sacred Heart School of Theology where Fr. Ryan earned a Masters of Divinity Degree in 2012.

Along with his academic experience, Fr. Ryan has also worked in a variety of private sector industries where he gained some experience in sales, marketing, and finance. He worked for a privately owned debt collection company in Germantown, Wisconsin. Prior to beginning his studies for the priesthood, Fr. Ryan also worked in an accounts receivables department for a Fortune 500 company. Fr. Ryan’s entrepreneurial spirit is alive and well. In recent years, he has owned and operated his own vending machine business as well as a security consulting firm.

Fr. Ryan and five of his classmates were ordained to the priesthood on May 19, 2012 by the Most Reverend Jerome Edward Listecki at the Cathedral of St. John the Evangelist in Milwaukee, Wisconsin. All six men were ordained for service within the Archdiocese of Milwaukee.

Fr. Ryan’s assignment as one of the four Pastors serving Holy Family Catholic Community began on June 19, 2012. He also serves as an Executive on the Board of Directors for St. Mary’s Springs Academy, a K4 through 12th grade Catholic School System in Fond du Lac, Wisconsin.

Fr. Ryan enjoys the outdoors which he attributes to his years of involvement in the Boy Scouts of America where he earned his Eagle Scout award. He also enjoys traveling, and spending time with his family and friends.